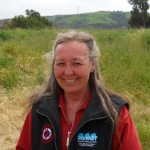 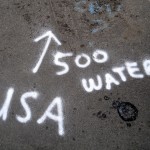 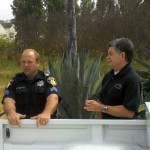 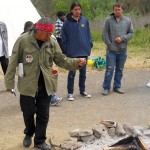 This morning, a ceremony was held to honor Connie Short, who came off a four day prayer fast at 10am. Her prayers were for the protection of the ancestors, the well-being of the protectors, and a peaceful and favorable end to this crisis.

After the ceremony, Steve Pressley of GVRD pulled up, followed shortly after by four Vallejo Police cruisers. The police took a look around and spoke with Protect Glen Cove Committee members. During this conversation, multiple residents from the adjacent neighborhood came over to express their support of our efforts to the officers. One woman, also a resident, rudely interrupted the conversation, making false accusations that Vigil participants are consuming alcohol and screaming/shouting past 11pm every night. (As hundreds of witnesses can attest, there has been absolutely no consumption of alcohol in the encampment, and there is a strict policy of no drugs, no alcohol, no weapons.)

Also this morning, Vallejo Sanitation, Water, and PG&E workers came to the site to do surveying and marking, under direction of GVRD. They spraypainted lines and markers on the asphalt. – “USA” was sprayed in a few places, which stands for “Underground Service Alert”, indicating that excavation is being planned. All of this suggests that GVRD is still actively pressing forward with their development plans.

These events have highlighted the need for more legal observation/ documentation – so we ask our supporters to keep this in mind, and bring video or audio recorders if you have them.

In Wounded Knee’s words, “Don’t let them intimidate you. Keep your prayer strong.”