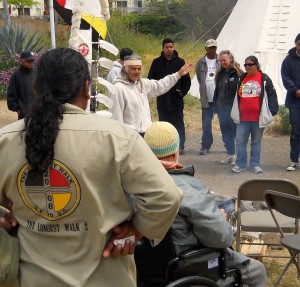 The promised negotiations between tribal members and the Greater Vallejo Recreation District have not taken place as GVRD continues to stonewall by not committing to participate in negotiations with tribal members engaged in the ongoing spiritual gathering at Glen Cove. Despite the efforts of the U.S. Department of Justice and State Senator Noreen Evans to encourage a mutually-acceptable resolution of this dispute, GVRD still has not agreed to a new round of discussions. In a further act of bad faith, GVRD sent utility workers to begin marking the area.

Tribal members including spiritual leaders continue to seek a new meeting with GVRD to try to resolve the plans of GVRD to use bulldozers to grade a hill that is likely to contain human remains and to build toilets and a parking lot on the burial site.