An update for supporters and friends of Sogorea Te 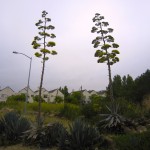 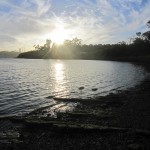 I want to begin by thanking each one of you for your support in protecting and preserving Sogorea Te (Glen Cove), a sacred site that has been in what is now Vallejo, CA for over 3500 years. During our occupation of the land from April through July of last year, many of you were instrumental in putting aside your lives, giving of yourselves unselfishly, and participating in creating a living community. This community allowed us all to not only protect a sacred site, but also to see what is possible for humans when they come together and rely on one another, centered around a basis of spirituality and belief in one another.

Each time someone walked onto that land and paid respects to the fire, it strengthened the community as a whole. The miracle was not in just protecting the site, but in protecting each other and allowing the space to include almost anyone who came with a good heart and good intentions. Over the months that we lived together, we endured weather hardships, boredom, laughter, tears, celebrations, and disappointments. We created bonds that will stay with us forever; sometimes with people we would have never imagined being in our lives before Sogorea Te.

We were truly blessed by the ancestors, because we took a stand and because we opened our hearts and allowed a healing to happen. No one and nothing can take away these gifts. Our lives have been transformed and we can never be the same, nor should we want to be. We were all a part of something more than history; we were a part of a miracle, a complete transformation. When that sacred fire that burned for 109 days finally went out in the physical sense, it continued to burn in each of us individually. When we come together, our shared experience rekindles those flames and reminds us that we are human beings with a purpose.

Over the last few months, people have posted alarming pictures on Facebook and have written things about the desecration of Sogorea Te, stirring up great concern amongst those who hold this sacred land close to our hearts. We, the Committee to Protect Sogorea Te, have tried to look into each issue as it has arisen and want to be transparent with all of the people who involved their time and lives in protecting the land. Some of the Committee kept watch over Sogorea Te during the early stages of GVRD’s park development project, while others, including myself, didn’t see what had happened to the land until October, when we were able to end the 2011 Peacewalk there.

Let us not mince words. The sight of what had been done to our beloved land was devastating. We knew when we parted ways and crossed that gate on July 31st that Sogorea Te would never look the same again. But what we saw upon returning was nothing short of getting kicked in the gut. It literally took my breath away.

We mourn what once was. We celebrated a victory in July, and yet, looking at the land now makes this victory taste bitter in my mouth. Out of all that GVRD wanted to do with the land, we only asked for three things: that they not build bathrooms, not include a 15-car parking lot, and not grade a hill that contains] burials/cremations. These are for the most part what we won.

They are not going to build a bathroom, the parking lot is only two handicap parking places and will be located adjacent to the sidewalk. We were aware that GVRD planned to take out the invasive species of plants and tear down the mansion and, yes, even put in trails. However, when I went there several weeks ago, what I saw was that the entire site had been molested. The creek is virtually exposed, all of the trees have been cut down, and, to our dismay, the grading has occurred.

In December, we were able to visit Sogorea Te and walk the site with tribal monitors and other tribal representatives. As I walked along the area where the hill once stood, I looked for anything that could stop them from continuing the destructive grading, but couldn’t find even a shell. The tribal representatives said that they did not find any cultural artifacts or remains and that the hill was only "fill". In fact, there were many cremations in the area, yet because the soil of the hill had been moved previously and 5ft of it has now been scraped off, finding remnants at this stage seems near-impossible.

It was frustrating that the tribal representatives didn’t have any answers. When was the project going to be finished? "I don’t know." Why did they take out native plants and still leave some of the invasive? "I don’t know." Will the tribe make a statement or have a public meeting to let people that supported the tribe in obtaining a cultural easement know what is happening to the land? "No. We don’t have to answer to anyone."

A tribal sovereign government is still a government. It is also a fact that this same tribal government allowed for the desecration of Sogorea Te in decades past and continues to make concessions to other developers, allowing desecration of other burial and sacred sites. Together we must decide what needs to be done to stop the on-going desecration of all of our sacred places.

The story of Sogorea Te is ours collectively. We each make up a part of the history that was a miracle. It is our voices that need to reach out to everyone. We stood up and lead a good fight. We protected a sacred site, and, at the same time, we protected ourselves and each other. We each brought to Sogorea Te our best and became better human beings because of this experience.

We all continue to mourn not just the loss of parts of the sacred site, but also the community we created and left behind. Human beings need to be needed, and for some, this sacred place gave us a place to belong, a place that we each had worth, and a place where prayers are answered. Our ancestors continue to bless us in so many ways.

I am eternally grateful to each person- elder, adult, youth and child. Grateful to the plants, animals, elements, and medicine that was shared. Grateful for all of the lessons learned and that I continue to learn from this experience. I am grateful to the Creator and the ancestors for allowing me to have such wonderful people cross my life path–and for the continued journey that they have in store for us, as we continue to be inspired by one another and look forward to that community that we all know is possible.

Corrina Gould, Chochenyo/Karkin Ohlone
On behalf of the Committee to Protect Sogorea Te 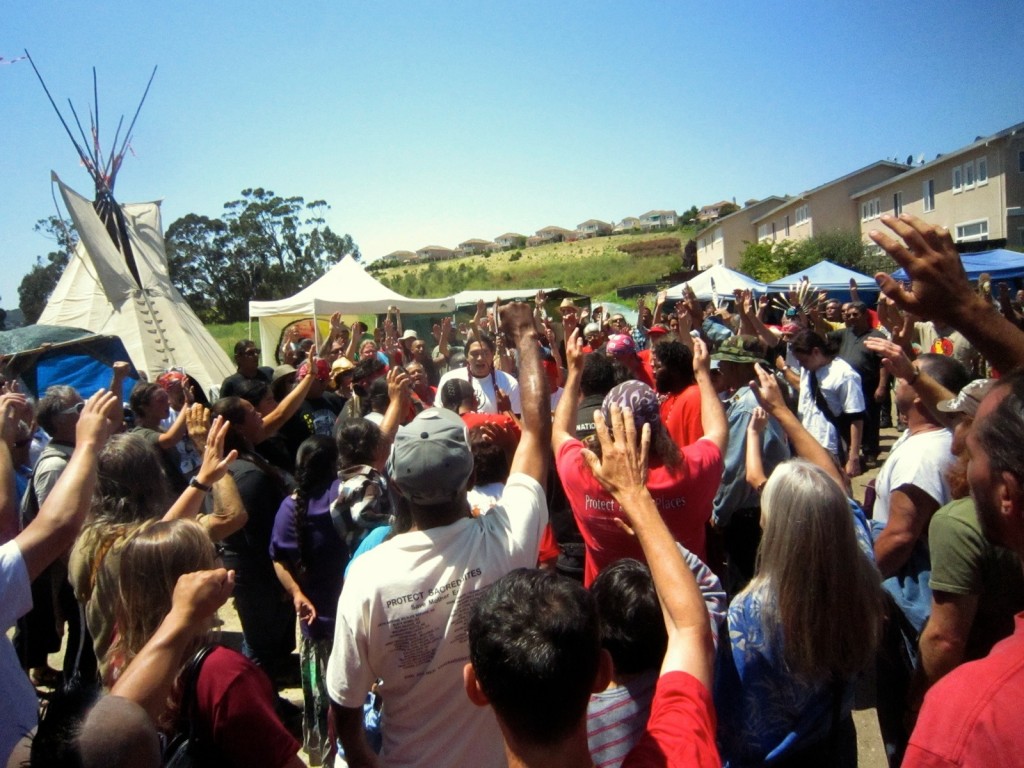 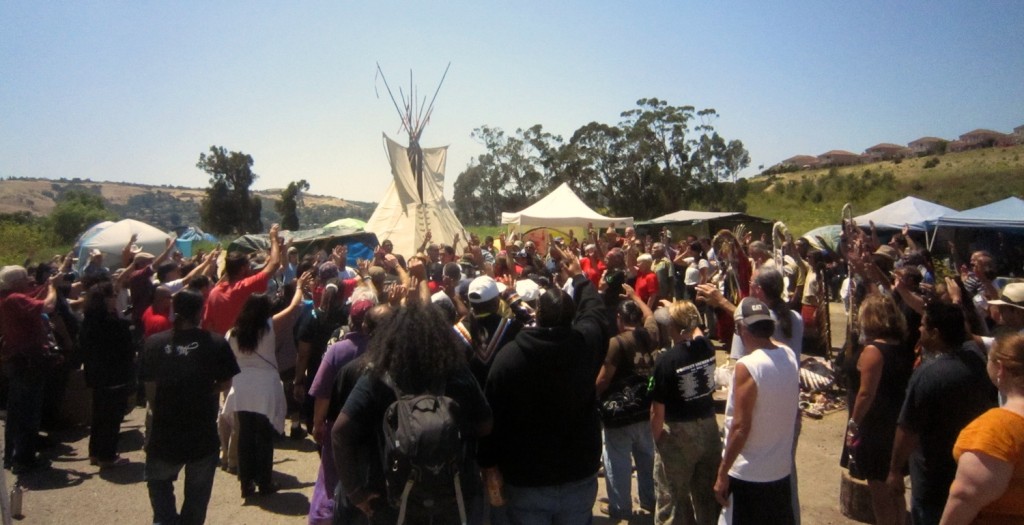 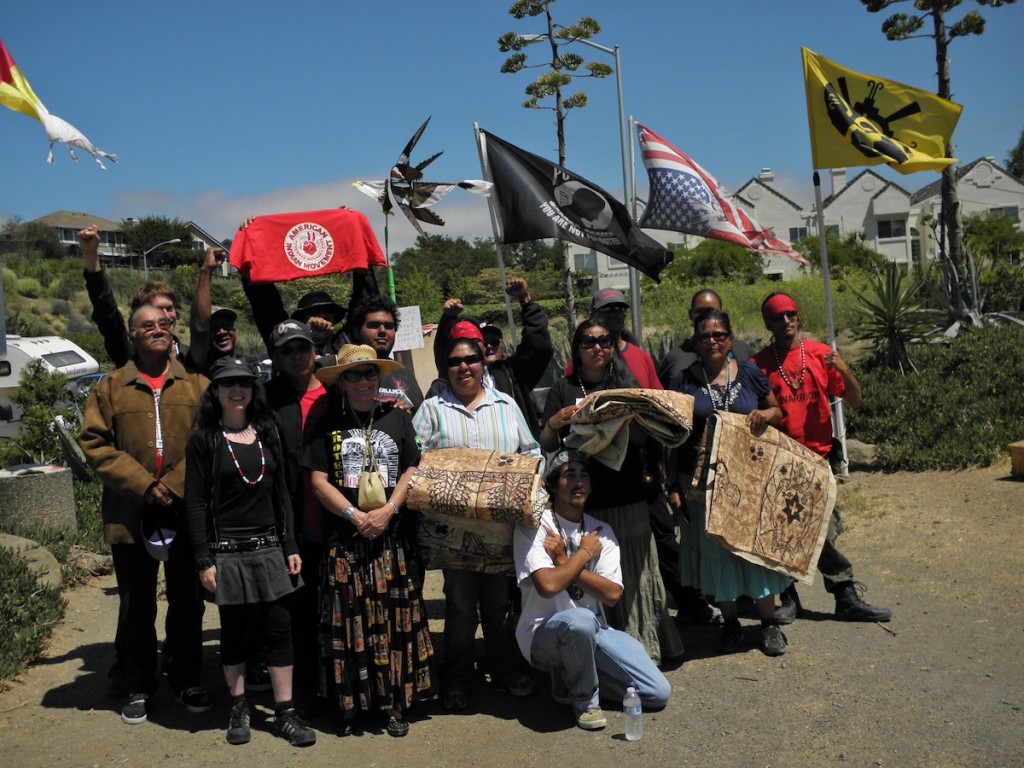