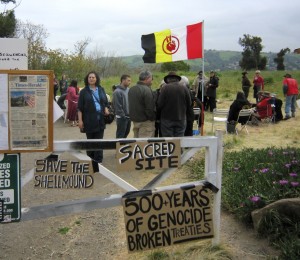 What is Sogorea Te?

Sogorea Te (sa-gor-ah teh) is the Karkin Ohlone name for the place now referred to in English as Glen Cove.

What would the Protect Glen Cove Committee like to see happen with the land?

Glen Cove is a sacred burial and ceremonial ground, and we wish to protect it from any further unnecessary disturbance. This means that we adamantly oppose the construction of a parking lot, restrooms, and paved trails. We also adamantly oppose the proposed bulldozing/ re-grading of the hill to the west of the cove, because it is likely that this area contains human remains and sacred objects.

We would like to see the Glen Cove area remain open to the public as a natural area, and for the grounds to remain clean and intact. We are in agreement with GVRD about dismantling the dilapidated Stremmel Mansion which is built on top of a sacred shellmound, however we are asking to be directly involved in this process to ensure it is done in the least impactful manner possible, without the use of heavy machinery. Please see our Proposal to GVRD for more details regarding what we consider to be respectful treatment of the land.

GVRD states that they, too, want to preserve the site.
Isn’t there agreement on this?

No. GVRD regards Sogorea Te as park land, which they can manipulate for the purpose of improving recreational use without respect to the wishes of Native American community. As stated above, Sogorea Te is a Sacred Burial Ground of our ancestors, and many aspects of GVRD’s plan are absolutely unacceptable to us. In accordance with Articles 12 and 25 of the UN Declaration on the Rights of Indigenous Peoples, we assert our right to free, prior and informed consent in decisions relating to our ancestral burial and ceremonial grounds, as well as our right to maintain and protect these grounds. 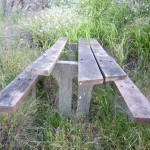 Glen Cove’s wild, unmanicured character makes it unique as a place for local residents to take in a fresh breath of air. Residents don’t need more restroom facilities or a parking lot. And for visitors, ample street parking already exists, such that hundreds of visitors to the site during the ongoing prayer vigil have been accommodated.

GVRD has repeatedly stated that “park” hours are from sunrise to sunset, which precludes the need for lights beyond those on the road adjacent to parked cars. Native American elders have stated that in order for the ancestors to rest peacefully, the burial grounds should be lit at night only by the moon and stars.

The Glen Cove area has been utilized by thousands of indigenous people over a period of at least 3,500 years. GVRD’s Master Plan attempts to define the documented “cultural resource areas” on the site, and provide protection for them. Over and over, archeologists have attempted to map out the extent of these “resource areas”, only to uncover new artifacts and remains in subsequent visits to the site. According to Miley Paul Holman’s archeological assessment, commissioned by GVRD,

"While each successive researcher has added something to our understanding of the historical and prehistoric resources inside the park, this understanding is still incomplete and at times misleading."

Mr. Holman then goes on to state:

"It is the opinion of this author that sufficient data does not exist to assess the impacts which may be caused to the archaeological site either by landscape alteration and/or the rehabilitation of the house and removal of the caretaker’s house. Any removal of plants, architectural features or other forms of even surface grading may cause damage to intact archaeological deposits, and may unearth intact or disturbed human remains."

Despite these clear indications from archeologists that the planned development is likely to cause irreparable harm to what they call “archaeological deposits” and human remains, GVRD is choosing to recklessly press forward with bulldozing a large section of the site, building a parking lot with bathrooms, constructing additional trails including a paved trail, and aggressively removing non-native trees and plants.

GVRD attempts to isolate “culturally sensitive areas” with defined boundaries, which can simply be worked around. As explained above, the extent of the “archaeological resource” is NOT clearly understood or defined. Futhermore, even if it was clearly defined, the entire area surrounding the burials is considered by Native people to be Sacred Grounds.

GVRD proposes capping the known burial sites with 12 inches of soil, which they call a “protective layer”. This is considered by Native American spiritual leaders to be an unnecessary disturbance and a desecration. Mother Earth provides a natural “cap”, as leaves settle on the ground and decompose, creating soil.

How would the proposed development by GVRD be financed?

GVRD alleges that grant money has been allocated to this particular project such that it cannot be redirected. But it is untrue that this plan is the only one that could receive these funds. In fact, a solution that accommodates the needs of Native peoples could easily be reached, utilizing the same monies.

Significantly, this grant money does not provide the funding needed to maintain the proposed facilities over time. According to their own website, GVRD was actually $128,278 over budget for the 2009-2010 calendar year and are, by their own calculations, estimated to overspend by a whopping $854,413 for 2010-2011. Visit their website to view their entire budget summary.

A March 29, 2011 article in the Vallejo Times Herald reported that “Mayor Osby Davis is trying to talk recreation district officials [GVRD] into delaying a tax measure they say they may need to maintain Vallejo’s parks.” The piece goes on to quote GVRD board Chairman Gary Salvadori’s statement that “an annual $40- to $50-per-parcel tax would likely be needed to maintain city parks at an acceptable level.” How can developing new facilities at this juncture make any financial sense?

I read that the protestors at Glen Cove are defacing the site with graffiti and litter?

Participants in the prayer vigil at Glen Cove have been actively cleaning up and care-taking the land throughout the duration of their presence there. In addition to the daily practice of picking up errant trash left by fishermen and other visitors, on April 17th 2011, vigil participants collected and hauled 300 pounds of garbage away from Glen Cove. Participants also painted over the graffiti that had been scrawled on the front of the Stremmel Mansion.

GVRD claims that “a majority” of native people support their proposed development. Is this true?

No. For over 10 years, there has been a popular concerted effort within the local native community to stop GVRD’s proposed park development. This effort has drawn an overwhelming amount of support from native and non-native people in California, across the US, and internationally. Supporters include numerous tribal councils in California, well known American Indian leaders, and the Inter-Tribal Council of California. Hundreds of letters of support have been collected, as well as thousands of signatures on petitions. See our Statements of Support page for details.

Throughout the planning process, GVRD has obstructed and limited the involvement of local Native community. Through a Public Records Request, the Protect Glen Cove Committee discovered proof that GVRD has intentionally withheld information about comment periods from local Native people. For more information about this, please see page 8 of the Civil Rights Complaint filed against the City of Vallejo and GVRD. [ See also: 4/28/11 Addendum to the Civil Rights Complaint.]

As can be observed in public records and on the Statements of Support page of our website, opposition to development plans has been clearly voiced at all stages of GVRD’s planning process by numerous Native American individuals and groups, including SSP&RIT and Protect Glen Cove committee members. Regardless of widespread and clearly voiced opposition, GVRD’s current plan continues to involve the bulldozing of a hill that likely contains human remains and sacred objects, construction of a bathroom, and the paving of a parking lot.

Isn’t there a Native American group that is endorsing GVRD’s development?

GVRD’s claim of approval by a Native American group is based on the Native American Heritage Commission’s process, in which one individual Native American is selected as a “Most Likely Descendant” (MLD), and this person is then empowered by law to issue recommendations regarding development that could impact a burial site. The voices of the hundreds of other Native people who have ancestral ties to the land in question are not taken in to account, and the MLD is not accountable to them. The MLD then can become a Native American Site Monitor, being present on site when digging/grading occurs. Site monitors are paid a generous hourly wage, so there is a financial incentive for them to be involved.

In the case of Sogorea Te, there are at least 10 tribal groups in California who have historical ties to the land, and whose ancestors could be buried there — and only a representative from one of them, Kesner Flores of the Rumsey Band of Wintun Indians has been consulted. These groups include the Ohlone, Patwin (Wintun), Bay Miwok, Coast Miwok, Wappo, and Tule River Yokuts. GVRD’s park development plan has been approved by the appointed MLD, a man of Wintun and Paiute ancestry. To our knowledge, this man’s position is not supported by any formal organizations.

An underlying issue is that the California NAHC process itself is unjust and needs to be legally challenged. In the opinion of many experts it is a violation of Native American Federal Law, as well as a violation of the UN Declaration on the Rights of Indigenous Peoples, because one arbitrarily selected individual cannot rightfully speak and make decisions on behalf of entire indigenous nations.

A recent editorial by the Native News Network describes this as the “send us your real chief routine”:

The officials in Vallejo, California have engaged in a methodology that has worked against the overall well-being of American Indians for centuries by talking to certain American Indian groups that agree with their position and pitting them against other groups of Indians.

The officials want to define or determine who should speak for American Indians. Then, they wage a public relations campaign to demean the efforts of those American Indians who oppose their position.

If GVRD was truly interested in respecting and working with the wishes of the Native American community, they would meet in good faith with the Protect Glen Cove Committee and other concerned Native groups with ancestral ties to the land to find a mutually acceptable way to move forward.

Do Native Americans want to build a casino at Glen Cove?

Absolutely not. There are no financial interests whatsoever behind the struggle to prevent GVRD’s park development. We would like to see the site left undisturbed for the ancestors to rest in peace and for visitors to appreciate as nature takes its course.

I heard that Native Americans want to hold Pow-Wows at the site?

There have never been nor will there ever be Pow-Wows held at Sogorea Te. This is a sacred burial ground and it would be completely inappropriate to have large commercial and entertainment-centered events on this land.

Why, despite everything, does GVRD continue to single-mindedly pursue their park development plan? What is really motivating them?

This is probably the most asked question. It is one which we ask ourselves every day, yet the answer remains unclear, except maybe to the GVRD staff themselves. We can only pray that they find understanding and compassion in their hearts.

Do you have additional questions that aren’t answered here?

Please email us:
protectglencove [at] gmail.com