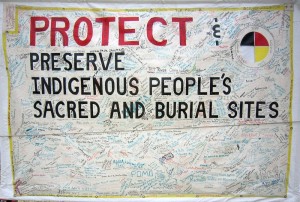 Volunteers have collected over 20,000 signatures of support from people across the country, including many native nations and family clans. In addition, over 1,500 letters have been collected from the community and sent to Senator Barbara Boxer, State Senator John Burton, and Assemblywoman Pat Wiggens. Many Tribal Councils in California, some of which represent the descendants of tribes identified to have utilized the Glen Cove area, have passed resolutions opposing any further desecration. Some of these resolutions and letters are excerpted below, with the option of viewing PDFs of the full documents:

Inter-Tribal Council of California
4/15/2005 Letter [ view PDF ]
"Our association represents 41 tribes throughout the State of California. A major part of our efforts are to promote the protection and preservation of burial sites, historical and cultural areas of California tribal people. Sites such as the Glen Cove Burial site represent significant historical evidence of our people being present on this land for thousands of years. It is without doubt that these locations must be preserved in recognition of the culture of indigenous people."

Mishewal Wappo Tribe of Alexander Valley
John M. Trippo, Chairman – 7/22/2004 Letter [ view PDF ]
"As a descendant of the Mishewal Wappo people, who have been identified as a Tribe who inhabited the area in question. We vehemently and distainly oppose the development of the Glen Cove site. We must stop this atrocity and insensitivity to the indigenous people, no matter what tribe they may be a descendant of. We must preserve and protect for now and the future."

Redding Rancheria – Wintu / Pit River / Yana
4/26/2011 Resolution [ view PDF ]
"The Greater Vallejo Recreation District and the City of Vallejo are currently proposing to develop a park with trails and amendments that would desecrate the Glen Cove Shellmound Burial Site. The Tribe supports preserving this sacred and historic site."

Kashia Band of Pomo Indians of the Stewarts Point Rancheria
4/1/2010 Resolution [ view PDF ]
"The Tribe acknowledges the Glen Cove Shellmound Burial Site (aka Glen Cove Waterfront Park) as a sacred site that must be protected and preserved for its historical, cultural and religious value."

Me-Wuk Indian Community of the Wilton Rancheria/ Henry Sangmaster
Undated Letter [ view PDF ]
"[SSP&RIT] has been paramount in bringing the importance of the Glen Cove Burial site to the forefront of the public conscience with great strength and courage. I have witnessed firsthand at your meetings the efforts of Indian and Non-Indians alike working together in a common goal of preserving history and it makes me so proud to be a part of this exciting time. The Me-Wuk Indian Community of the Wilton Rancheria thanks your organization for all of the outstanding work that you have done thus far and wishes all of you the best of luck."

Rumsey Band of Wintun Indians
2/26/2004 Letter from the Tribal Chairman [ view PDF ]
"The protection of Native American burial sites and other spiritually and archaeologically significant areas, which are being desecrated or destroyed by vandals or development all across the State of California, is an issue of importance to all Native Americans. …The Rumsey Band of Wintun Indians supports [SSP&RIT’s] efforts to preserve and protect the Glen Cove Burial Site."

United Lumbee Nation – Deer Clan
2/4/05 Letter & Form Letter [ view PDF ]
"One of the most urgent and important issues at this moment is the protection and preservation of our Native American sites located in Glen Cove, in the City of Vallejo, California…. It is very important that we teach our young people of their heritage and of historical site protection and preservation. If we do not teach this, all will be lost for the future generations to come. It will be as if we never existed. We must protect and preserve what we have now."

Tallige Cherokee Nation – Bear Clan
4/17/11 Letter from Chief Protecting Bear [ view PDF ]
"The effort to desecrate our ancient burial grounds is the same as the US Government desecrating the Arlington National Cemetery. They would not destroy that gravesite, nor should there be an attempt to desecrate our ancient burial grounds…Speaking on behalf of the Bear Clan, and the Tallige Cherokee Nation, your cause is just, and courageous. May the Great Spirit hear our prayers for you."

Sacred Sites International / Leonard & Nancy Becker, Co-founders
4/19/2011 Letter to GVRD [ view PDF ]
"We have been studying and protecting natural and built sacred places since 1990 and it is our expert opinion that Glen Cove is a sacred site. It is a burial site and just like other cemeteries it should be respected in the manner that is culturally acceptable."

Ken Leslie, Resident of Glen Cove Landing
4/24/2011 Editorial in the Times Herald [ view PDF ]
"As a resident of Glen Cove Landing, I am totally opposed to the City of Vallejo’s proposed park on a Native-American burial ground and historical site. The bottom line is: The area of the proposed park in Glen Cove is sacred to many, and historical to us all. It should be left in its natural state."

Gayle McLaughlin, Mayor, City of Richmond
5/16/2011 Statement [ view PDF ]
"This sacred site in Vallejo offers so much for the City of Vallejo. It offers an opportunity for the city to embrace a very unique place and show that it respects and preserves the history that took place at this site…I call upon the GVRD to find an amiable solution. As someone who works closely with the Native American community in Richmond, I would be happy to be a part of a meeting to include the Sacred Site committee, the GVRD, and the Native American Heritage Commission Board (in Sacramento). "

Patricia Wiggins, Assembly Member, 7th District
9/3/2004 Statement [ view PDF ]
"…developing this sacred site with its historical and cultural significance as well as disregarding the grave sites of the ancestors of particular groups of people would be a travesty and an intolerable mistake…I strongly support the preservation of this sacred land."

Solano Peace and Justice Coalition (of Vallejo)
1/11/2005 Letter to GVRD [ view PDF ]
"On behalf of over 500 local area residents associated with the Solano Peace and Justice Coalition, we request the Greater Vallejo Recreation District and the City of Vallejo respect, preserve and protect this culturally and archaeologically sensitive area which is considered sacred to Native Americans."

Footprints for Peace / Ann Garlick & Marcus Atkinson (Australia)
4/8/2011 Statment [ view PDF ]
"If this desecration goes ahead many people throughout Australia and the world will be disgusted with the ongoing abuse of Native Peoples’ by the United States. It is time to respect the wishes of the original peoples of California, after destroying most of their sacred sites surely you would have enough decency to save Sogorea Te for future generations."

First Nations Advocates / Raymond Shelton
1/21/2004 Letter [ view PDF ]
"For too long, other interests, both private and commercial, have superceded those of the Native Americans in the development of our communities. It is past time to hear the hearts of the indigenous people and consider their needs.
The cause at hand is more than commercial. It reaches deep into the culture and history of the original people, touching the very nature of their existence. The sacredness of burial grounds cannot be overestimated. The ancestry of a proud people lies beneath the soil, eternally connected by the Circle of Life."

Greenaction for Health and Environmental Justice
4/5/2010 Letter to GVRD [ view PDF ]
"I am writing to urge the Greater Vallejo Recreation District to take immediate action to provide full protection for the Glen Cove Sacred Site in Vallejo. As an organization concerned about the protection of the environment, health and Native cultural and sacred sites, Greenaction urges [GVRD] to truly protect this area."

Robin Thomas, History M.A., UC Davis
7/25/2010 Letter to GVRD [ view PDF ]
"I am requesting that the Greater Vallejo Recreation District respect the rights and wishes of the First Peoples of Vallejo and immediately stop all development at Sogorea Te. In addition, meaningful consultation with the Vallejo Inter-Tribal Council and other local Tribes and Indigenous Organizations must be initiated at once. A people’s culture is its life and its survival- it is essential that these rights of religion and sacred space be upheld."

Members of the Jewish Community of Solano County
3/10/2005 Letter [ view PDF ]
"We strongly oppose disturbing or desecrating any burial sites, regardless of whether or not they use headstones. We wholeheartedly endorse the effort to find alternative locations for the development under consideration for the Glen Cove Waterfront Site so that we can keep the Shell Mound burial grounds intact." (signed by 7 people)

The Diablo Greens
Undated Letter [ view PDF ]
"The Diablo Greens would like to express our strong support for the preservation of the Glen Cove Burial Site and other important native sites. This site, that dates back 3,500 years, must be protected from development. Sites like this are vital not only to the descendants of the tribes that created and used them, but to every resident of our county."

The Pagan Alliance (of Benicia)
4/29/2011 Letter to GVRD [ view PDF ]
"This is a grave insult to the Native people both of this region and nationwide. We beg of you to consider the error of judgment that GVRD seems intent on making. This mistreatment of the beliefs and cultural importance of the Glen Cove site will be remembered and reflects poorly on the GVRD board, the City of Vallejo and our entire region." – signed by Board of Directors

J.T. Miller, Vallejo Resident
3/25/2011 Letter to Vallejo Times Herald [ view PDF ]
"After [Wounded Knee DeOcampo] took me on a walking educational tour of the area I left with a full understanding and respect for the Native Americans position. I suggest anyone interested should do the same. Why don’t they use that $1.5 million they have to maintain the parks already built? If this is the way GVRD spends tax dollars it can count on not getting my vote for any tax increase now or in the future. "

Please consider showing your own support for the protection of Glen Cove by adding a comment, below, or by signing our online petition. A list of petition signers and their comments may also be viewed through the petition webpage:
http://www.petitiononline.com/ssprit/petition.html 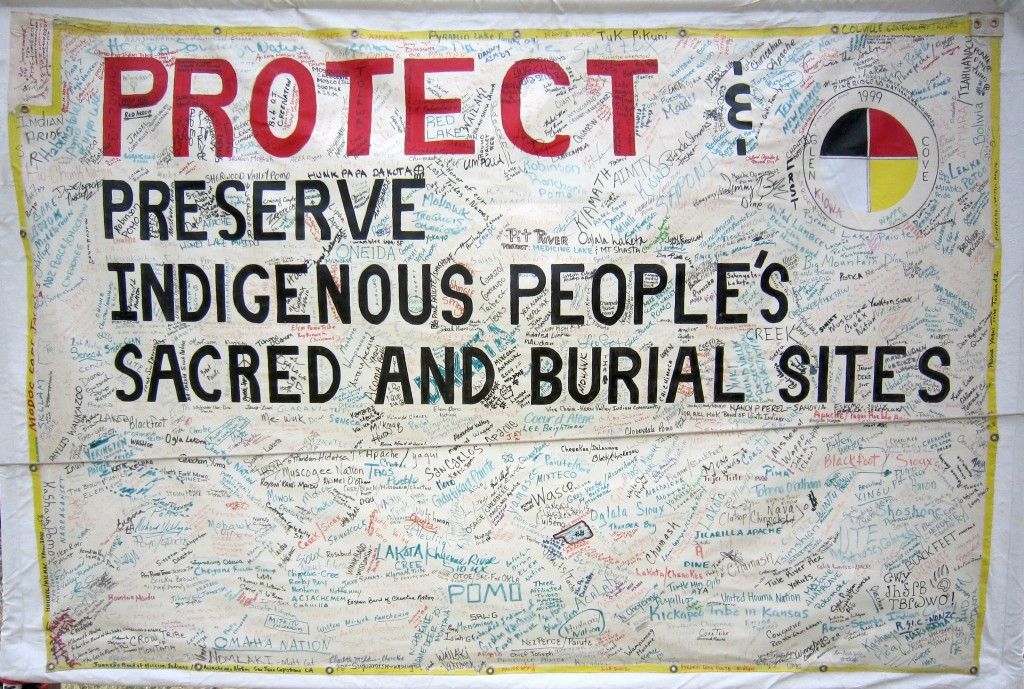 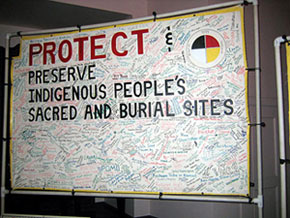 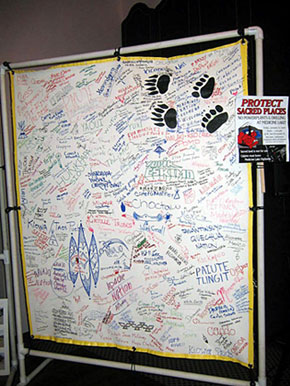 27 Responses to Statements of Support