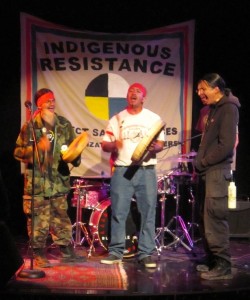 It was a blazing hot day on the land, yet many still came to
visit, including a crew from San Jose-based Native Voice TV, who conducted interviews and received a tour of the grounds.

Representatives from the ongoing ceremony at Sogorea Te spoke in Oakland this evening at a concert featuring Blackfire (Dine’ rock/punk) and Aztlan Underground. Klee Benally of Blackfire addressed the crowd, urging people to meaningfully involve themselves in the protection of Glen Cove as a way of respecting and giving back to the original people of this stolen land.