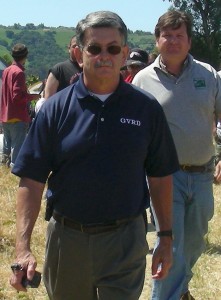 This morning, Steve Pressley of GVRD again walked the
grounds, this time with GVRD’s park maintenance supervisor. They stated that sometime next week, they’ll weed-whack and mow down the grasslands at Glen Cove, because as the grass dries, its a “fire hazard”.

Today’s Times-Herald newspaper article reported that “In response to the protest — which has delayed construction — the GVRD has hired a public relations firm [Perry Communications Group] in an effort to ‘dispel myths and rumors’ about the Waterfront Improvement Plan. The contract is not to exceed $10,000, officials said.” Ten thousand dollars!

In the evening, ceremony was held at Sogorea Te for a newborn child, who was welcomed to the world with prayers for well-being and long life.