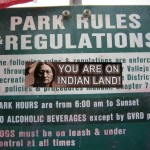 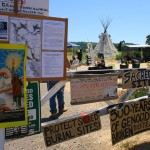 At about 10am, Steve Pressley (GVRD Maintenance/ Development
Manager) entered the grounds of Sogorea Te with camera in hand, taking photographs without permission of people, tents, the fire, and the altar. Shane McAffee (GVRD General Manager) also walked the grounds today at about 1:30pm, with GVRD’s lawyer.

GVRD is not only refusing to meet with the Protect Glen Cove Committee, they have also declined to sign the agreement produced from an initial meeting on April 18th, in which some basic understandings between GVRD and the Committee were established regarding the ongoing prayer gathering at Sogorea Te.

We would like to affirm clearly: We have the right to be here. We are here to stay, until this situation is resolved. In Fred Short’s words, "This is Indian Land. We don’t need permission to stay here and protect our ancestors." We don’t need permits to hold ceremony on our sacred grounds. And we thank all those who have brought tents, because our people who have been in ceremony and prayer with us have needed shelter from the rain, winds, and cold.

In accordance with the United Nations Declaration on the Rights of Indigenous Peoples:

Indigenous peoples have the right to maintain and strengthen their distinctive spiritual relationship with their traditionally owned or otherwise occupied and used lands, territories, waters and coastal seas and other resources and to uphold their responsibilities to future generations in this regard. (Article 25)