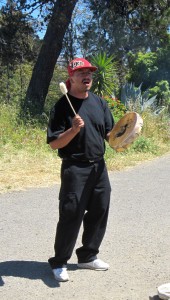 A contractor came by today who told us that his job is to paint a poison
chemical treatment on the stumps of waterfront trees at Glen Cove, once the Atlas Tree Service cuts them down.

GVRD is not only still refusing to meet with the Protect Glen Cove Committee, they are also declining to sign the agreement produced from an initial meeting on April 18th, in which some basic understandings between GVRD and the Committee were established regarding the ongoing prayer gathering at Sogorea Te.

We continue to request the presence of anyone who will join us in prayer, and we are especially requesting that people stay with us throughout the coming two days, Thursday and Friday, as the threat of a possible court-ordered police action is looming.

As promised, new photos have been posted from days 11-12.
Also, there is now a Spanish language page on this website.