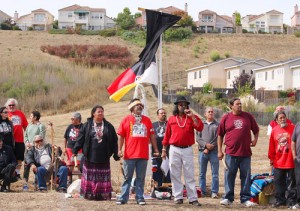 Members of the Native American community and other Glen Cove shellmound supporters started the ceremony with an opening prayer.

The Native American community from the surrounding area came together in a ceremonial gathering and prayer vigil Saturday at the Glen Cove shellmound in Vallejo.

The noon event was a part of their ongoing effort to protect the sacred Native America burial site from the city’s development plan.

Standing in the middle of the prayer circle, Wounded Knee Deocampo of the Sacred Sites Protection and Rights of Indigenous Tribes encouraged the crowd to join the battle against the Greater Vallejo Recreation District to preserve the site.

“I hope the city of Vallejo and GVRD understand our battle,” Deocampo said. “We are asking them to respect our ancestors.”

Deocampo said GVRD has been moving forward with its plan to develop the site into a park by planning to build picnic tables, public bathrooms and a parking lot on the sacred burial ground.

“It is a violation of human rights,” he said. “We don’t build bathrooms on top of a Christian cemetery.”

In the past, however, GVRD officials had said they intend to restore the site to what it originally looked like without damaging it, and will adhere to all state and federal laws if they do encounter historical or cultural artifacts, or remains.

GVRD general manager Shane McAffee had also said in past interviews that they are only trying to improve the area by building these facilities.

“We made an exception for today because it is for a good cause,” said a member of the Bear clan, who asked to remain anonymous.

The Native American community members are not the only one who is opposed to the development plan. A few of Glen Cove residents are also voicing their objections.

“Fiscally, it is a mistake,” said Peter Van Slyke, a member of the Glen Cove neighborhood council. “Vallejo has so many other areas that need rehabilitation more than this area.”

Van Slyke moved to the neighborhood in 1995.

The ceremony was one of the largest events that have had with about 250 attendees, Deocampo said.

“Many people of different culture, faith and ethnicity are here today to support the battle,” he said.

He also said that he is ready to give the city all of the 20,000 signatures of everyone who is supporting the cause.