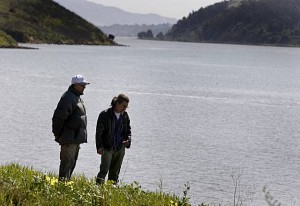 Plans by Vallejo to turn a scraggly stretch of waterfront on the Carquinez Strait into a park with paved parking, trails and restrooms are infuriating local Ohlone Indians who say the 15-acre site is sacred and should be left alone.

The property is Glen Cove Park, a spot that was the site of a 3,500-year-old Ohlone village and shell mound where thousands of people were buried.

The settlement is one of the oldest Ohlone sites in the Bay Area and among the few that has eluded development. But for decades, Vallejo has wanted to convert the wildland to a park with a portion of the Bay Trail, picnic tables and a pastoral array of native plants.

“What we want to do is return it to what it was 100 years ago,” said Steve Pressley, maintenance and development manager for the Greater Vallejo Recreation District. “As an agency, we have a responsibility to the public as a whole, and we need to consider all the components, not just the needs of Native Americans.”

Ohlone Indians say the land’s conversion couldn’t be more insulting, offensive and sacrilegious, particularly because the restrooms would be situated adjacent to the most sacred part of the site, the burial ground.

“They want to desecrate this sacred land,” said Norman “Wounded Knee” Deocampo, an Ohlone Indian and Vallejo resident who is fighting the plan. “As Native Americans, we need to save what we have left. All we’re asking for is this 15 acres.”

After years of planning, the controversy around the park is more heated than ever as Vallejo moves forward with the transformation. The city has begun to remove some nonnative trees, such as acacias and elms, and plans later this year to put in parking, trails, benches and restrooms.

But Ohlone, Pomo, Miwok and other Indians aren’t giving up their fight. Today they plan to gather at the site – they call it Sogorea Te – for a prayer ceremony as possibly a last-ditch effort to protect it from development. Singing, drumming, dancing, praying, and sage burning are among the activities planned.

“We want them to just leave this area alone,” said Luke Eisenbise, Deocampo’s brother-in-law. “They want to put up a plaque, which we think is pretty cheesy.”

The area is a natural spot for a village. It is sheltered from the howling winds and tides of the Carquinez Strait by a quiet cove and rolling hills. A creek supplies fresh water much of the year. It was a convenient gathering spot for Bay Area, delta and valley tribes to meet, although it was home base for the Karken band of Ohlone Indians, said Stephanie Manning, archaeological steward for the West Berkeley shell mound and Ohlone expert.

By the 1870s the land belonged to the Stremmel ranching family, which lived in the old ranch house until the 1980s, when it sold off much of the land for home development and deeded the strip along the water to the city for a park.

At first, the city planned to build playgrounds, playfields, a fishing pier, a large parking lot and other amenities, but partially because of protests from American Indians, it scaled back plans in the 1990s and began considering less-disruptive designs.

The latest plan, which began in 2002 and would cost about $1.5 million, calls for a small parking lot, a few picnic tables, restrooms and portions of the Bay Trail, Bay Ridge Trail and Great California Delta Trail. It also calls for the removal of most nonnative plants and trees, using the herbicide Garlon 4, and replacing them with native bunchgrass and other coastal plants.

The shell mound and village site will be unmarked and covered with dirt to protect them from vandalism and further disturbance, Pressley said. A sign at the entrance will educate visitors about the Ohlone and their contributions to California history.

Currently, the site is an off-the-radar paradise, a haven for dog walkers and Native Americans wishing to commune with nature and their ancestors.

Development will bring more people, as well as the possibility of vandalism from those seeking Native American remains and artifacts, Deocampo said.

Emily Jackson is not a Native American, but she walks through the area daily as a respite from her workday.

“We have enough manicured and landscaped parks,” she said recently. “This is one place that’s been left in its natural state. Why can’t we just keep it that way?”

The local neighborhood group, Glen Cove Community Association, is mostly in favor of the city’s plan, which reflects years of community meetings and public input. A developed, well-maintained park would be a boon for families, nature lovers and users of the Bay Trail, according to the group’s Web site.

Malcolm Margolin, author of “The Ohlone Way,” warned that the public should be especially conscientious of how ancient sites are treated, because so few remain.

“It’s not just an obligation we, as the dominant culture, have to save these sites,” he said. “There’s something to be gained from it. Otherwise we’re throwing away a well of history, heritage, wisdom, humor, fun. It’s about the past, but it’s also about our present.”