A message from Knute 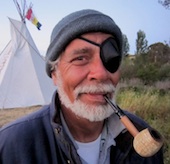 Knute, AKA “The Captain”

Knute, an elder of Saami descent who has been standing with us since Day 1, would like to share a message with our readers. He wants it known just how many different indigenous and earth peoples from all over the world have visited our spiritual gathering over these past two weeks, offering their prayers and solidarity. Indigenous peoples everywhere can recognize the pain of desecration, and the disrespect of being “unrecognized” by the government.

Many have heard our call and come out to Glen Cove to pay their respects, including people of Maori (New Zealand), Native Hawaiian, Palestinian, Negrito (Philippines), Lesotho (South Africa), Ethiopian, Inupiat (Alaska), Haida (British Colombia), Cree (Alberta), Saami (Scandinavia), Hopi (Arizona), Snohomish (Washington), Bolivian, Aquatine Basque, Okinawa (Japan), Mayan (Yucatan), Mixtec and Samoan descent. Knute wishes to again extend the invitation to all peoples who worship out of doors, to stand with us here in honor of the ancestors.