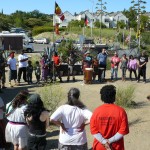 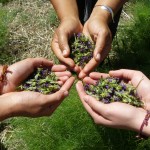 Week 14: Following last week’s large demonstrations at City Hall and
GVRD Headquarters, dozens of committed warriors, elders and supporters have remained in prayer on the land at Sogorea Te, tending the sacred fire and upholding their commitments to seeing the struggle through. As day 100 of the 24-hour prayer vigil approaches, everyone eagerly awaits news regarding the cultural easement being negotiated between the City, GVRD, and the Cortina/Yocha Dehe tribes. We pray that it will be an honorable agreement that will protect the ancestors by specifically preventing development and bulldozing on all 15 acres of the sacred grounds.

Each day, new visitors arrive at Sogorea Te, bringing prayers, gifts and inspiration, while longer-term participants in the vigil continue to develop relationships with the land, its plant and animal life, and each other. Some have continued to gather wild native plants from the area, such as Amole Lilies and California Mugwort, for use as food and medicine.

On Saturday the 16th, a large group of Mexica Dancers from Hayward, CA held a series of ceremonial dances at Sogorea Te, bringing gifts of copal and tobacco for the vigil’s altar. Also on Saturday, Martha Duenas Baum (Chamorro) of the Oceania Coalition of Northern California arrived at Sogorea Te with a load of cedar firewood. She plans to return with a contingent of island people from the Oceania Coalition this coming Saturday morning (the 23rd), with songs, gifts and prayers. 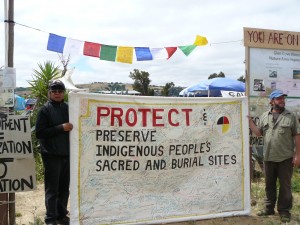 On Sunday the 17th, a string of Tibetan prayer flags were presented to Wounded Knee DeOcampo and other participants in the vigil, and were hung near the entrance to Sogorea Te. The prayer flags were sent by a member of the Marin County Tibetan community, who says that “Tibetans support the people at Sogorea Te and are praying for them.” When told recently about the situation at Glen Cove, he was greatly saddened and said that “it’s just like they’re doing to us in Tibet.”

This Wednesday, July 20th (today!), youth from the Oakland-based Homies Empowerment Program will be cooking up a storm and then journeying Sogorea Te, bringing dinner to all the warriors still holding it down. They will be meeting in Oakland at 5:00pm to carpool up. To view their Facebook invitation, click here. We are also expecting a visit from a group of young Native artists (Ojibwe, Metis, Maori, Dine & Hawai’ian) on Wednesday evening, accompanied by Melanie Cervantes. 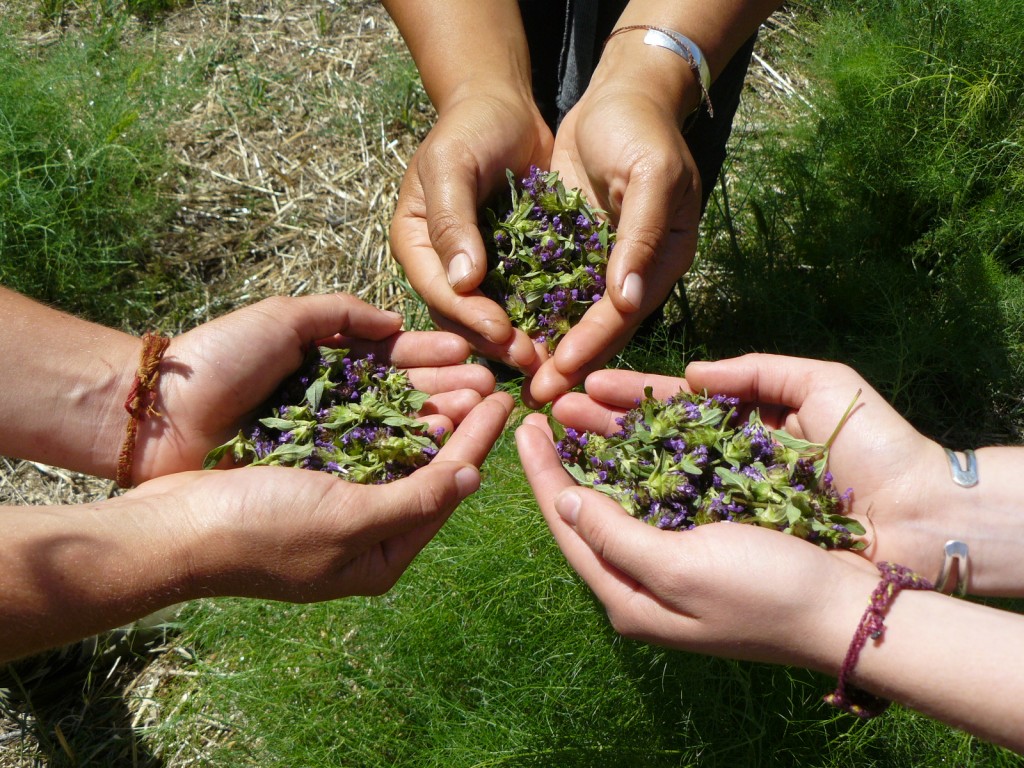 Self-heal (Prunella vulgaris), gathered from nearby Glen Cove for use in a medicinal salve. 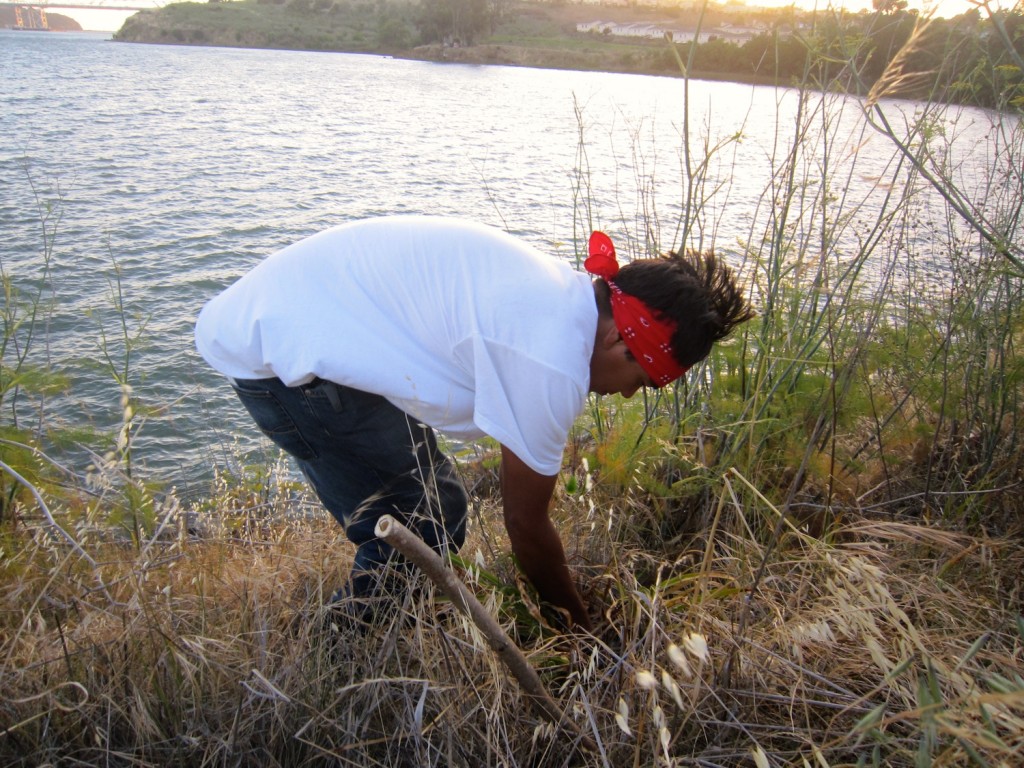 Gathering Amole Lily (Chlorogalum pomeridianum) AKA “Soap Plant” bulbs on the eastern bank of Glen Cove, to be roasted and eaten. 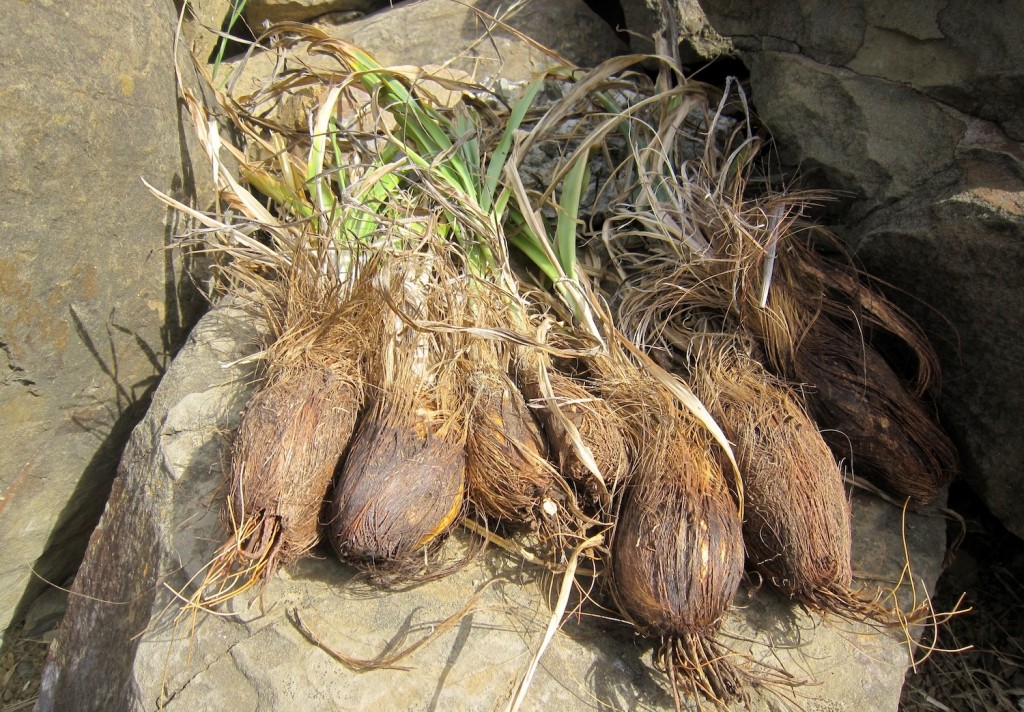 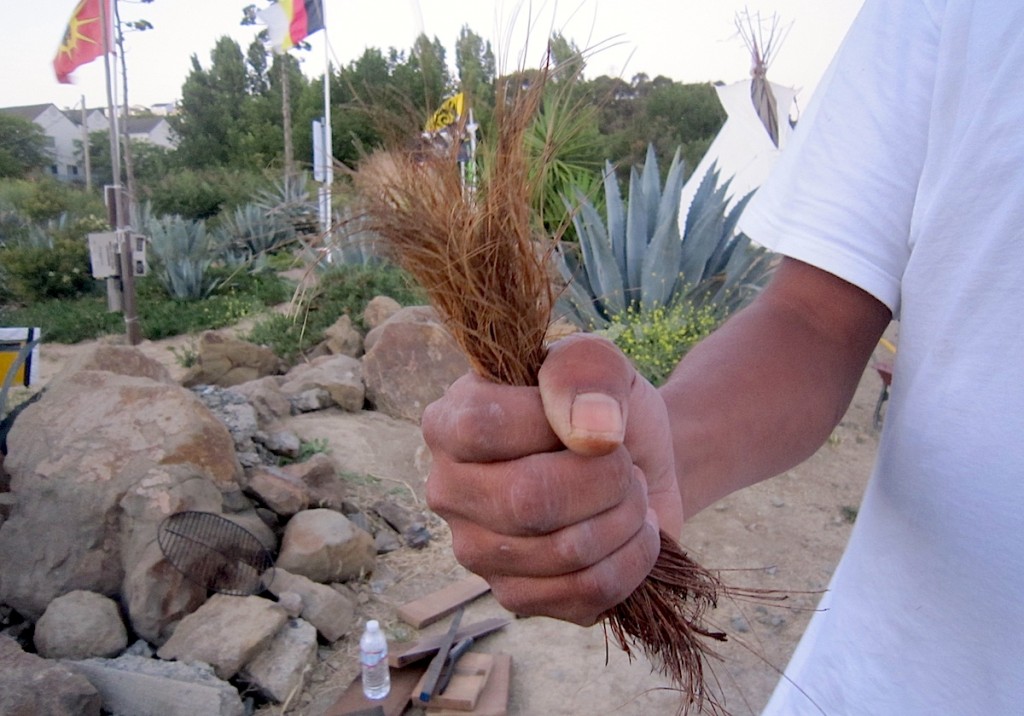 The fibers that form the Amole bulb’s husks make great cordage and brushes. 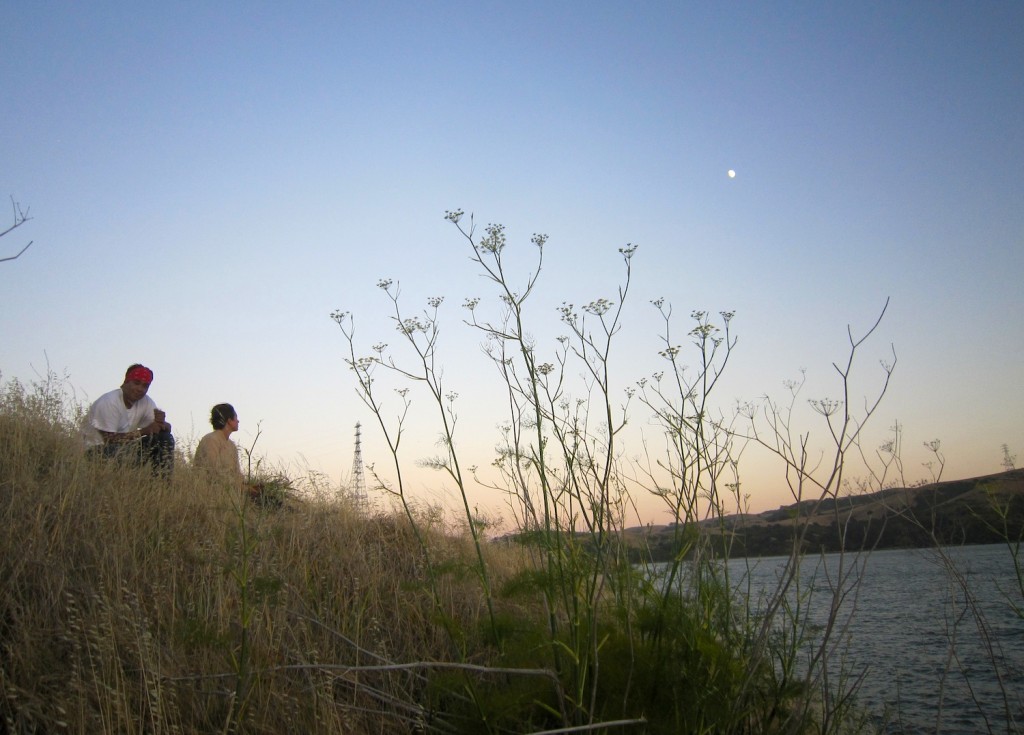 Sitting on the eastern banks of Glen Cove at sunset, with the rising moon. 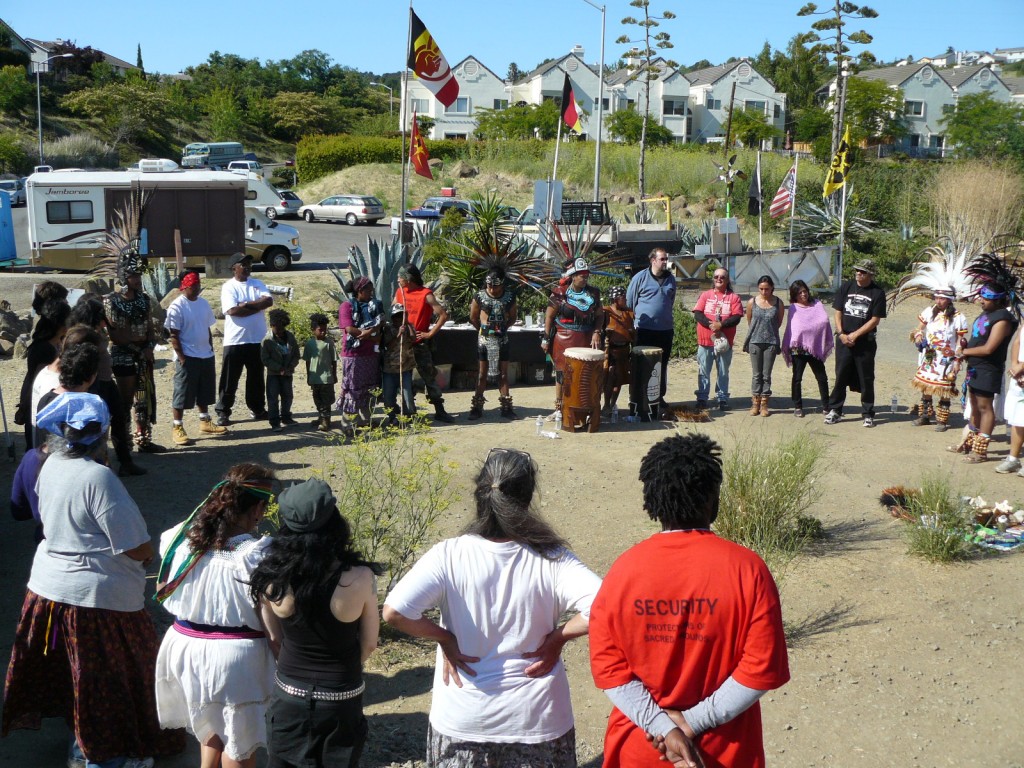 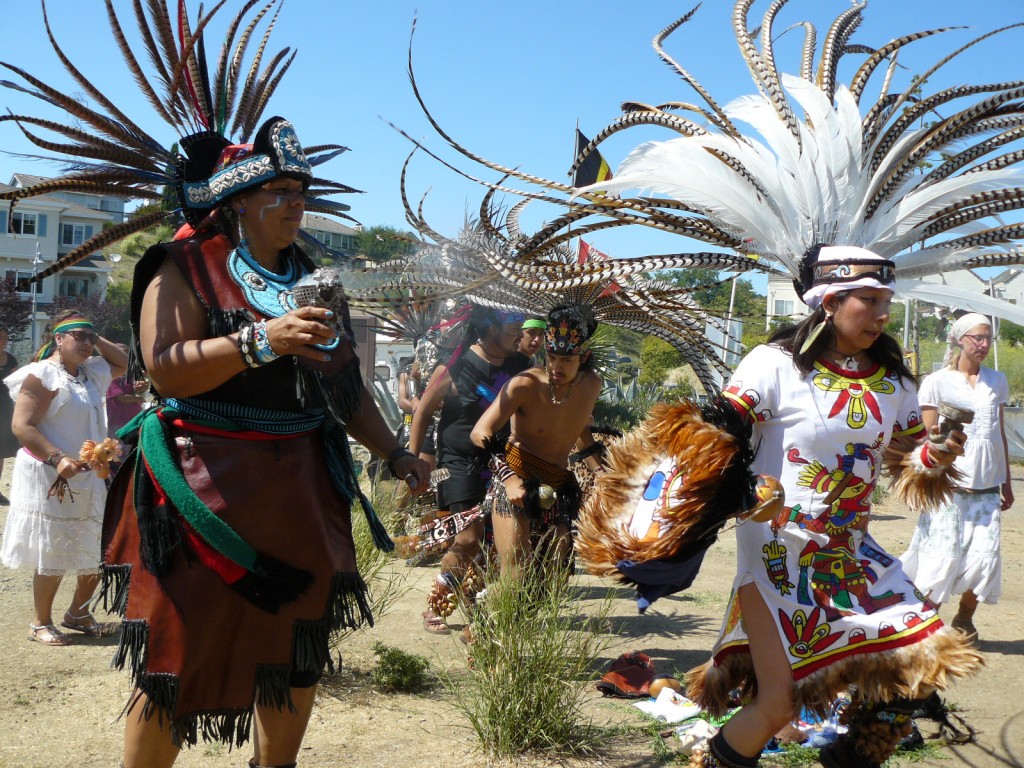 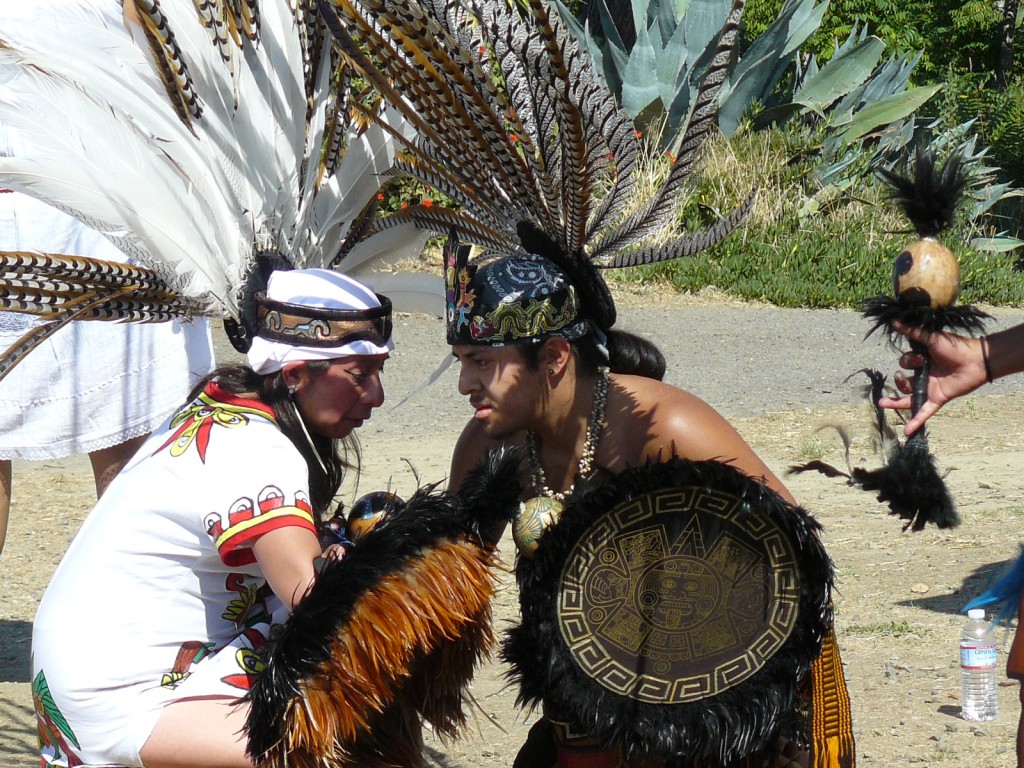 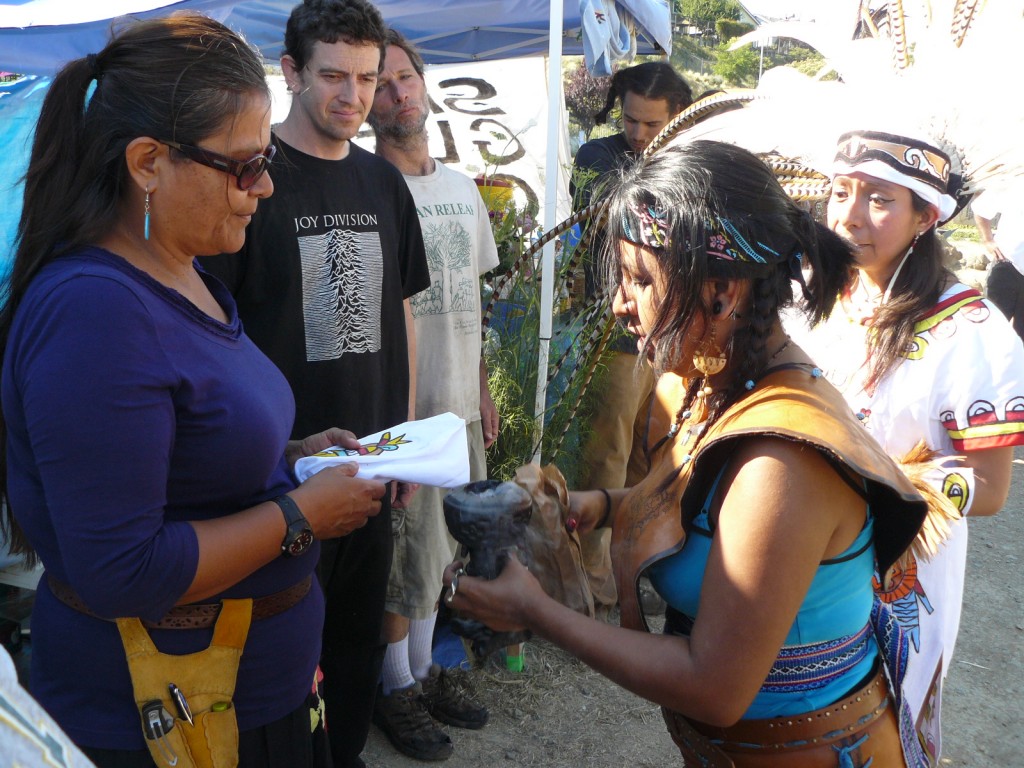 One of the Mexica dancers, presenting gifts (including copal and tobacco) to Johnella LaRose of the Protect Glen Cove Committee 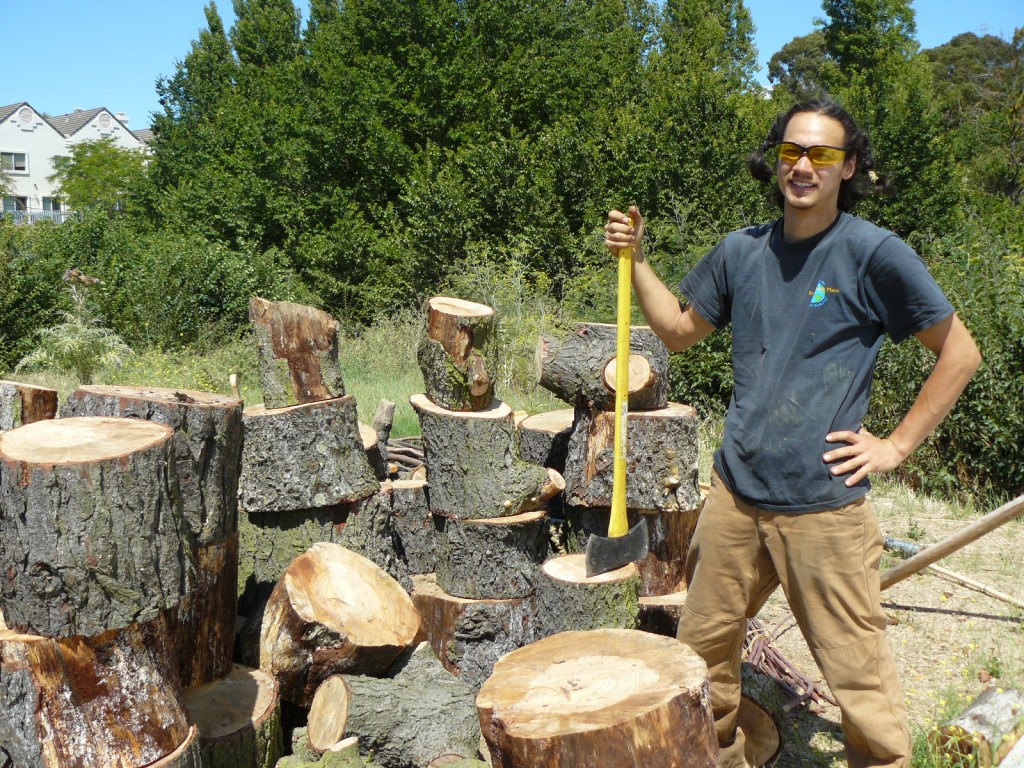 Kingman Lim, who runs a Berkeley-based tree service, brought cut rounds from a tree that he took down in Richmond on Sunday. 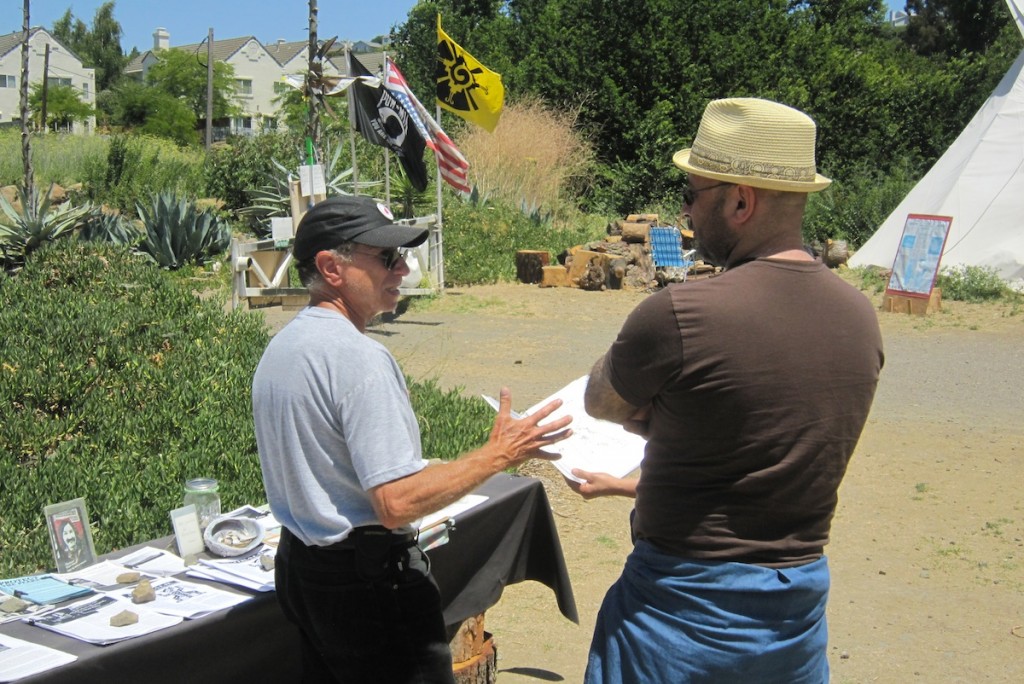 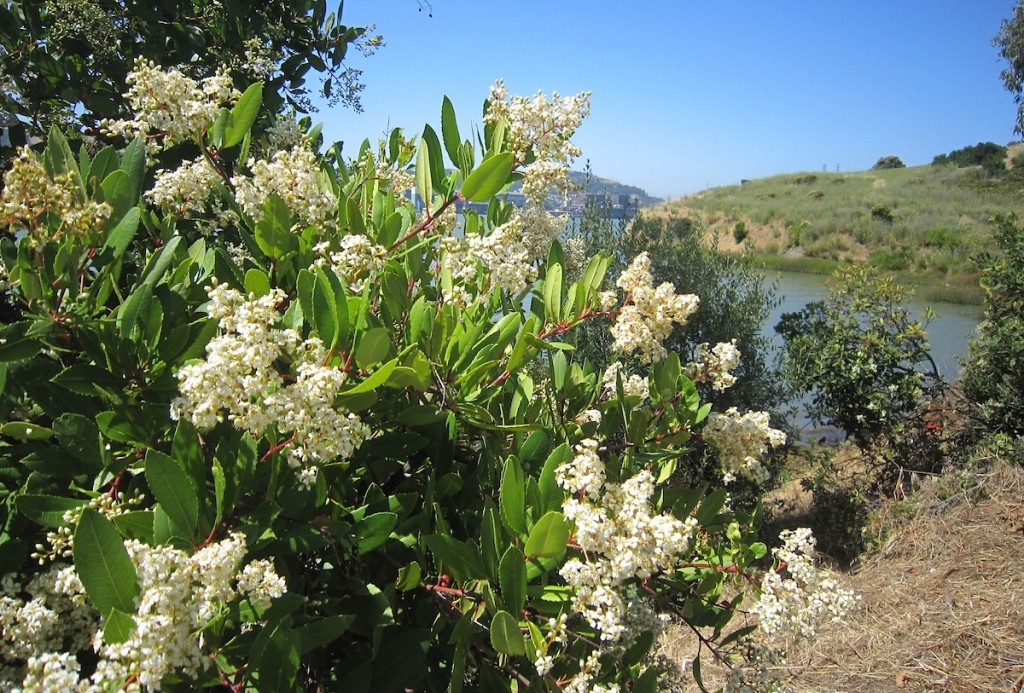 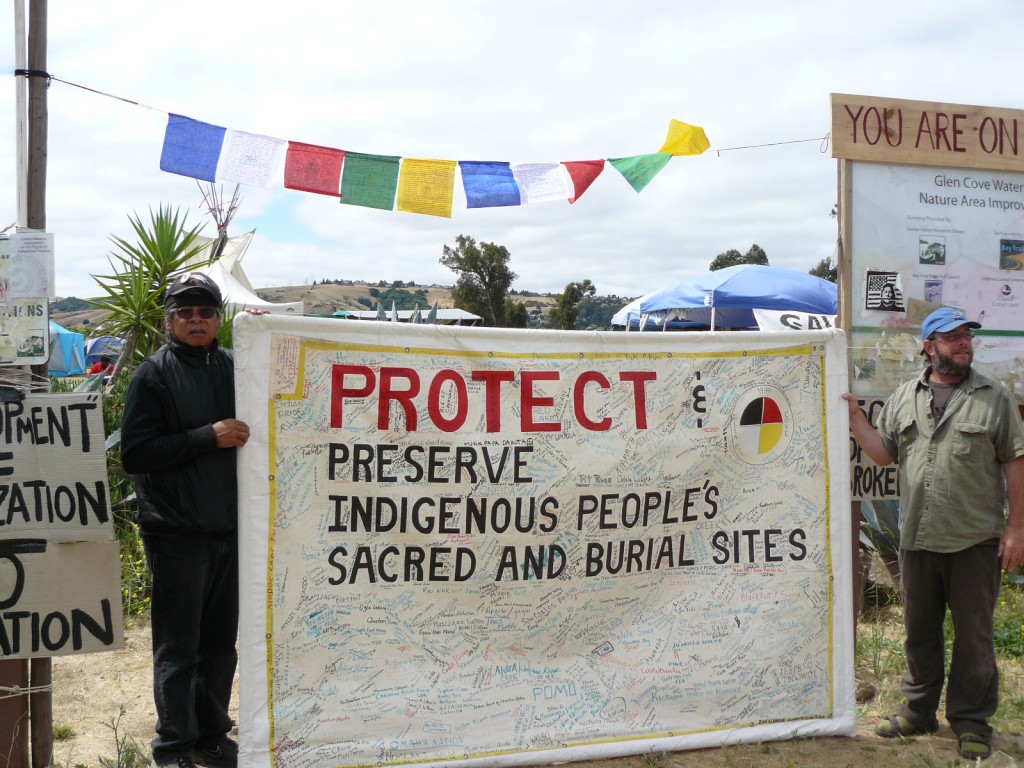 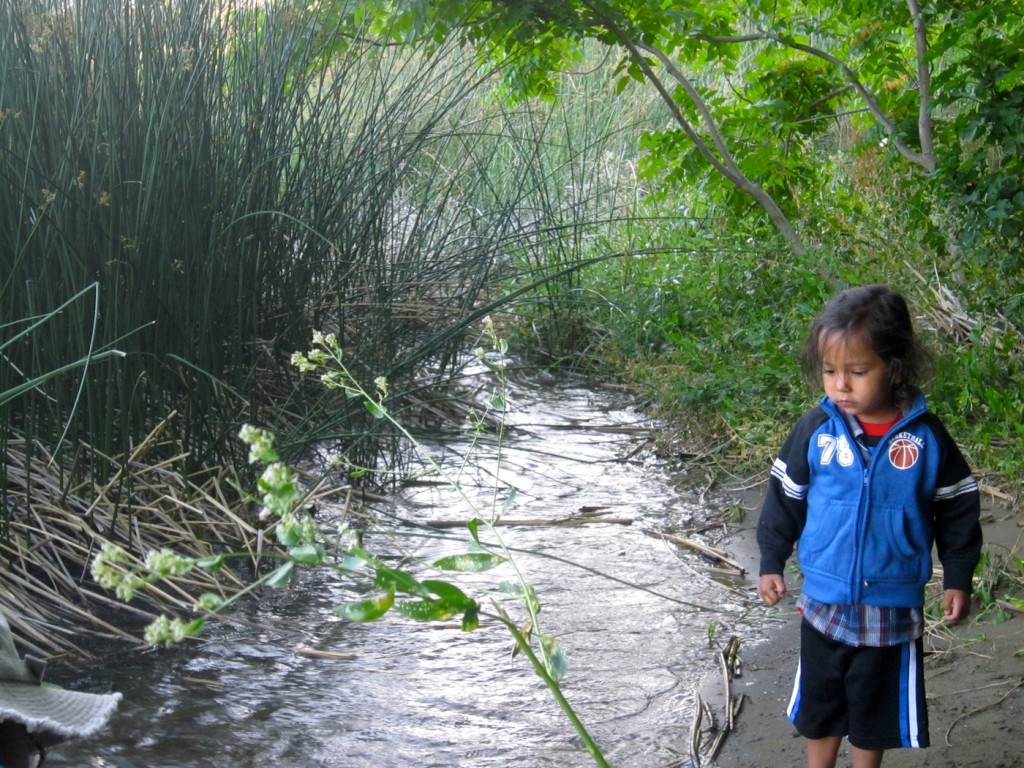