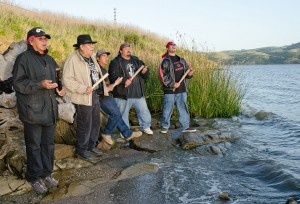 The sun has re-emerged after a few days of focused
prayer amongst rain showers, and the spiritual encampment continues to stand firmly and in good spirits. Dozens of new visitors arrive each day, as strategy meetings and legal work hum on in the background.

We are honored to announce that the 33rd annual 500 Mile American Indian Spiritual Marathon will be ending at Sogorea Te (Glen Cove) on June 23rd, 2011, after five days of running across Northern California. Runners have been asked to go in person to Sogorea Te prior to the run, to put down their prayer offerings at the sacred fire.

On Sunday, June 5th, the Winnemem Wintu tribe is planning to gather at Sogorea Te to dance for the Salmon. They have launched a campaign to restore endangered winter run Chinook Salmon to the McCloud River above Shasta. Just up-water from Glen Cove, thousands of threatened spring-run Chinook Salmon and thousands of imperiled Sacramento Splittail, a native minnow species, have recently died at the federal Central Valley Project (CVP) water pumps in the Sacramento-San Joaquin River Delta.

“Salmon need the splittail to survive in the Estuary,” said Caleen Sisk-Franco, chief and spiritual leader of the Winnemem Wintu Tribe. “The Estuary is necessary for the survival of Chinook. The Chinook are necessary for the water to be drinkable, and for the People. Climate change will come in to balance once we follow the salmon runs. This is why the Winnemem will dance for the salmon and the Estuary on June 5th at Glen Clove in Vallejo!”

Gene Doherty, President of the Solano County Native Plant Society and two other Plant Society members visited Sogorea Te this evening and received a tour of the grounds. Gene Doherty is at the forefront of a community effort to take over management of the Benicia State Recreation Area (located just adjacent to Glen Cove), since the State Parks system has announced plans to close it due to budget shortfalls. The visiting Native Plant Society members were very respectful and supportive. They agreed that there was no need for the Bay Trail to be routed through Glen Cove, and seemed to understand the importance of respecting Native peoples’ wishes regarding burial and sacred sites – Gene even asked if there were any known burial sites in the State Park that they should be sensitive to.

Three new pages have been added to the Protect Glen Cove website: