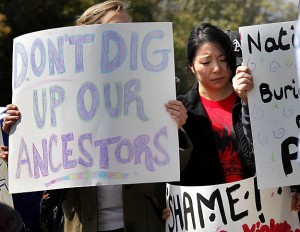 Work on the site “could start as early as Friday,” Angel said, though Pressley said it won’t, since special training is still needed for the contractors but will start within the month.

Protesters “don’t trust” GVRD officials, Angel said, and are “watching Glen Cove at all times,” in case work starts without warning. And unless some agreement is reached, the protesters will be there when it does. A gathering is planned Friday morning in any case, he said.

“People are coming from all over to Glen Cove in a spiritual way to stand with us in a peaceful manner,” said Corrina Gould, an Ohlone who said she has “direct lineage” to the area’s indigenous tribes. “Our ancient cemeteries aren’t protected like modern ones are, and today we make a stand and say, ‘No more! Our ancestors won’t be pulled up. Our ancestors won’t have a bathroom or a parking lot built over them!’ “